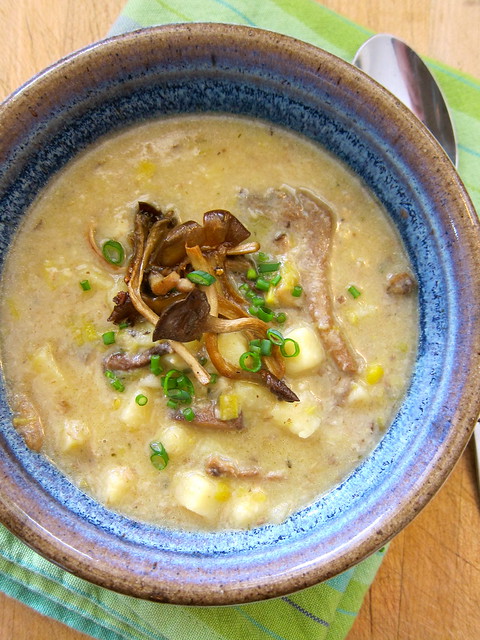 The thing we like best about soup is how well it takes to improvising, and a recent visit to the farmers’ market had us imagining a rustic mushroom soup, almost chowder-like, with chunks of potatoes and curly leeks rounding things out. The appearance of a new vendor, the New Hampshire Mushroom Company, and the wide selection of mushrooms they brought provided the inspiration, and we couldn’t resist buying up a sampling of several of their different varieties on display. 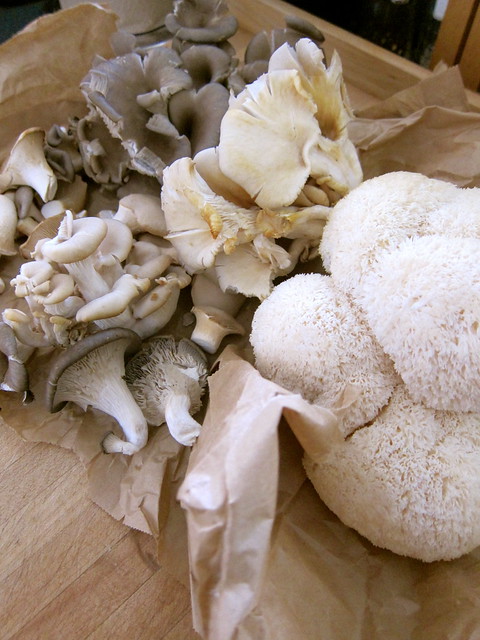 Above: Oyster, Blue Oyster, Elm Oyster, King Oyster, and Bears Head (or Lion’s Mane) mushrooms. We’ve grown shiitake mushrooms in the past, but weren’t able to produce enough to satisfy our needs, and are thrilled to see New Hampshire Mushroom Company filling in the gap in local supply. Specializing in both cultivated and foraged varieties, their mushrooms are frequently featured on the menus of Seacoast restaurants, and can be found at Golden Harvest and Rising Tide Natural Foods in Kittery, or Philbrick’s Fresh Market in Portsmouth. Of note, their Tamworth, NH, facility is open to the public every Sunday, with tours on the half hour from 12 to 3:30 pm. 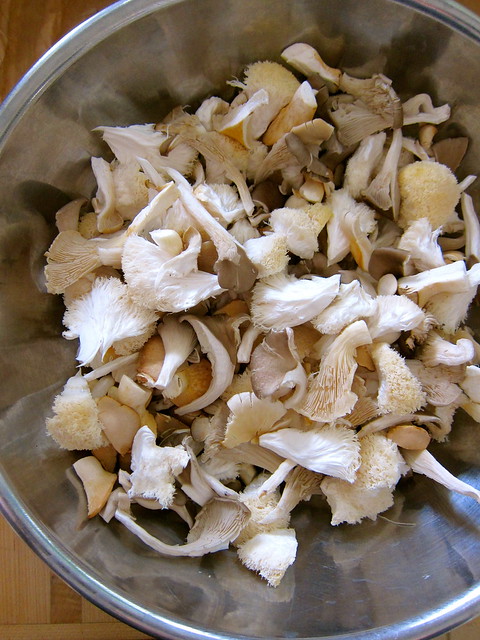 To start off, we tore the mushrooms into large but still bite-sized pieces — NH Mushroom recommends no smaller than 1/2″ thick — and keeping in mind they will shrink by half. If need be, anything still too large after roasting can be torn into smaller pieces later. 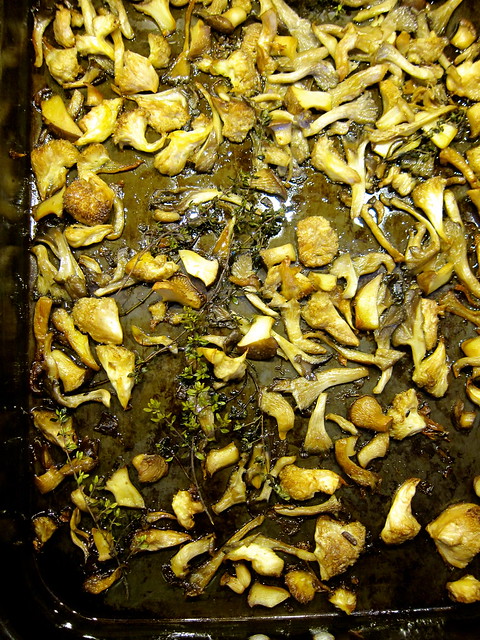 Once the mushrooms are roasted, nibbling is hard to resist. This medley gave us a chance to taste the different varieties, each with its own delicate notes of earth and forest air. We were glad to be able to use thyme from the awakening garden, just be sure to pull out the twiggy sprigs before adding the mushrooms to the soup. The roasted mushrooms were scooped out and put aside, and the pan deglazed with stock to pick up the caramelized bits. Seriously, though, we could stop here and be perfectly happy eating the mushrooms straight from the pan, on a toasted piece of crusty bread, or even topping a salad. 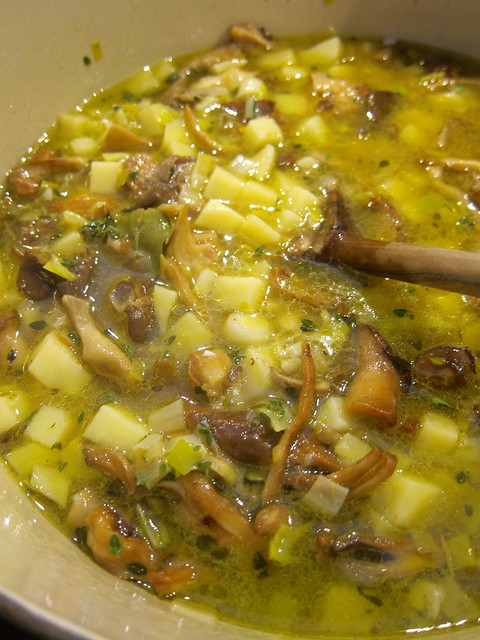 After the soup is combined and left to simmer until its contents have just reached the point of tenderness, you can decide to puree or not. We like a soup with a robust texture, and blend a cup or two to thicken the rest. To finish, we had just enough crema leftover to add a hint of creaminess, a dollop of creme fraiche or mascarpone, or even thick yogurt would also do; either way, this is entirely optional if you want to keep it vegan. In adjusting the seasonings, it may need a freshening shot of fortified liquor, or a splash of lemon to balance the richness. If you have the time and patience, you will be rewarded by letting the soup sit overnight, and garnishing with foraged chives adds an extra touch of spring.

– Heat oven to 400°F. Toss mushrooms with the thyme and enough olive oil to lightly coat. Season with salt and pepper, place in a large roasting pan, and roast for around 20 to 30 minutes, stirring midway, until the mushrooms begin to brown. Turn off the oven, remove the mushrooms to a separate bowl and set aside. Pour the stock into the roasting pan, scraping up the bits, and place back in the oven to deglaze in the residual heat.
– Take a heavy soup pot and add enough olive oil to slick the bottom. Saute the leeks or onions until soft, add the garlic, and continue cooking until fragrant but not browned. Stir in the potatoes, then deglaze with the Madeira. Add the stock and reserved mushrooms, and simmer for about 15 to 20 minutes, until the potatoes are just cooked.
– To finish the soup, adjust the seasonings with extra Madeira and a spritz of lemon juice. If desired, blend 1 to 2 cups for a thicker consistency, or add more stock for a thinner one.

14 Responses to Roasted Mushroom Soup with Potatoes and Leeks