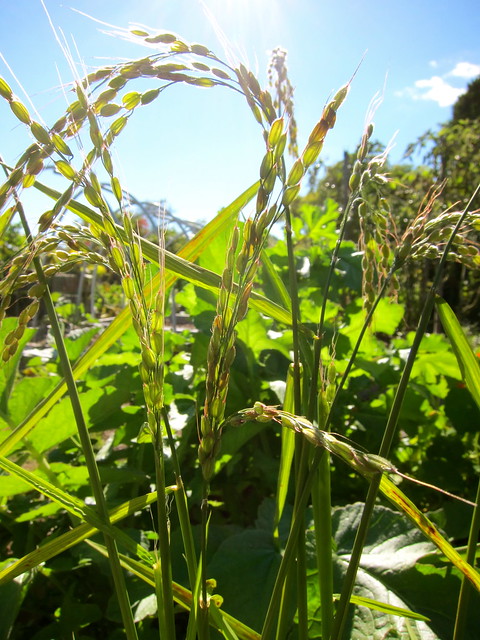 “Whether grown with Western machinery or Eastern backbone, rice is not the easiest grain to produce. It prefers a long growing season and warm humid weather. It is grown profitably in our country only in the Southwest, mostly in Arkansas, Louisiana, Texas, and California. However, rice could probably be grown farther north, at least for home use. The Japanese have learned how to grow it successfully as far north as Hokkaido, which has a climate similar to our southern New England.”
— Gene Logsdon, “Small-Scale Grain Raising”

We’d heard rumor that rice was being grown successfully in New England, and went on alert when we spotted it on the menu at T.J. Buckley’s while passing through Brattleboro a few years back. After a sumptuous dinner skillfully prepared from local ingredients, we had the chance to speak with chef-owner Michael Fuller. He told us that the rice was from Akaogi Farm, and that if we were still in town, we’d be able to find them at the Brattleboro Farmers’ Market. It was our chance meeting there with Linda Akaogi that launched our interest in growing this semi-aquatic annual ourselves. 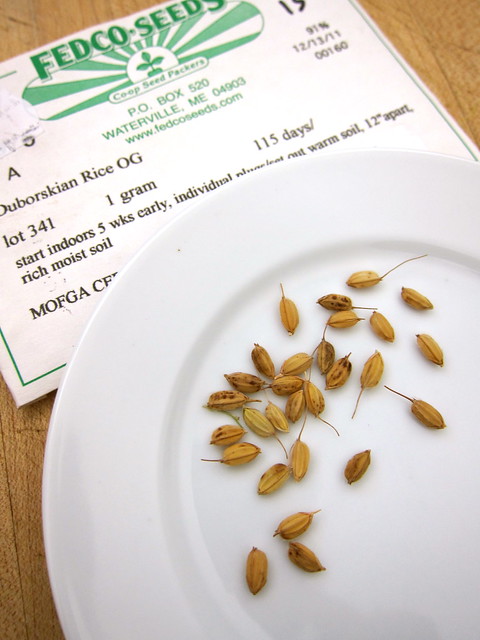 Following Logsdon’s observation on growing rice in northern climes, the Akaogi’s began experimenting with a short-grain rice from Hokkaido. To accommodate this grain’s need for water, they built up a model system of paddies that’s the focus of a series of annual conferences held there.  As a way of duplicating this condition at home, we planned to grow rice in buckets. After some research, however, we read about Roberta Bailey’s experience with growing Duborskian Rice (Oryza sativa) in Maine, and how this upland variety offered a more manageable approach than paddy rice in that it doesn’t require flooding in order to grow. Even more compelling, the resulting grains were being offered through Fedco Seeds, which would ensure a head start on adapting to local conditions. 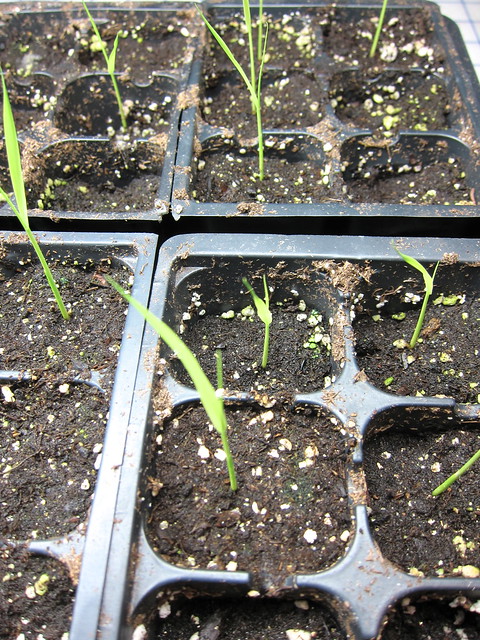 Mid-May (above): Seedlings started indoors under lights, and beginning to form first leaves. Rice can be direct seeded, especially in warmer climes, or transplanted. Our first year’s batch failed soon after transplanting, and we learned to plant only one seed per plug to lessen the shock. Though we didn’t pretreat, it’s recommended that they be soaked for 12 to 24 hours before planting, and started 4 to 5 weeks before transplanting into warm soil, which, here in Maine, isn’t until early June. According to Sara Pitzer in Home Grown Whole Grains, rice needs at least 40 continuous days with temperatures above 70°F, a challenge in our short season. 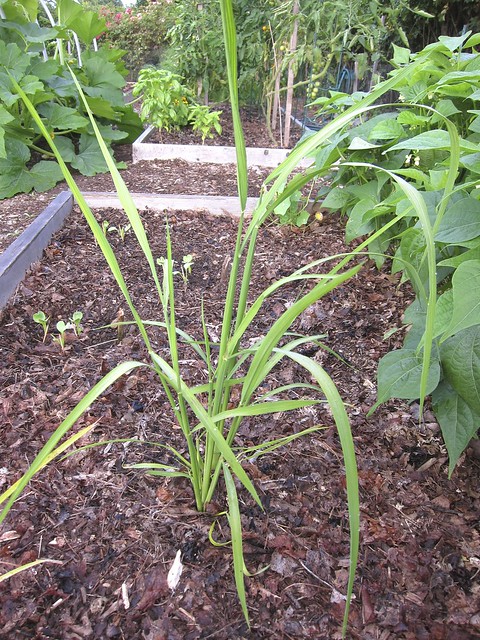 Mid-August (above): With a little experience, our second attempt last year brought us better luck. Out of the 9 seedlings transplanted, 3 survived, and two of them long enough  to set multiple stems called tillers, each destined to produce a seed head, or panicle. Though Duborskian is referred to as a dry-land rice, it still needs constant moisture and plenty of it, which we helped along with a thick layer of mulch. 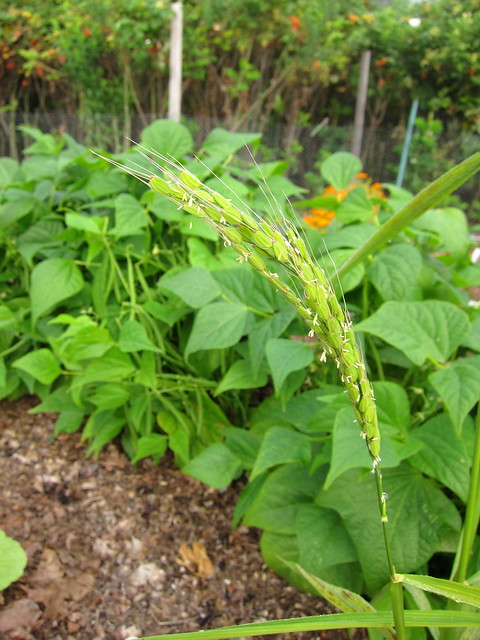 End of August (above): The panicle towards the end of flowering, with some stamens still attached. As the rice plant flowers and sets seed, this is especially the time to ensure the plant has enough moisture to keep its energy up. 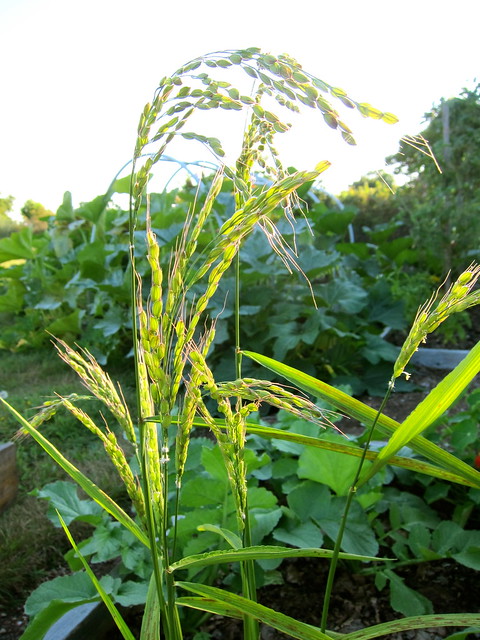 Early September (above): Though it may have been little more than watching grass grow, we are ridiculously excited to finally have something recognizable as rice. Seeing these seed heads nodding as they mature made the entire effort worthwhile. 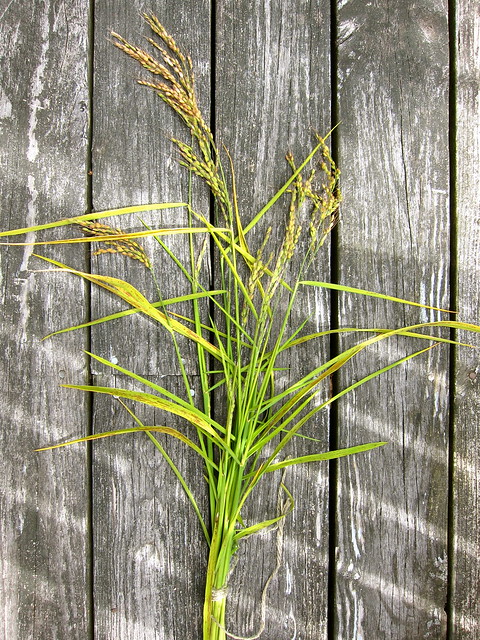 Early October (above): By the first week of October, we harvested the rice by clipping the tillers and hung them to finish drying. On further reading, we found that rice is ready to harvest when the seed heads look brownish gold and look heavy. These probably should have been left longer before harvesting, and, though they can tolerate a light frost, we’d didn’t want to run the risk of having them rot on the plant. 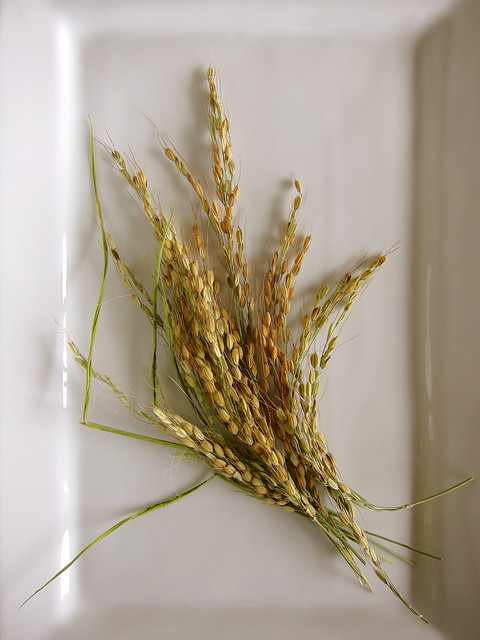 Upland rice may not be as productive as paddy varieties, each plant can average up to as much as 18 tillers each, and our two rice plants produced over a dozen tillers total. After drying, the grains are separated out, usually through threshing and winnowing to produce what is known as rough rice. At this point, the rice is still encased in a hull, and can be saved as seed for 10 years. 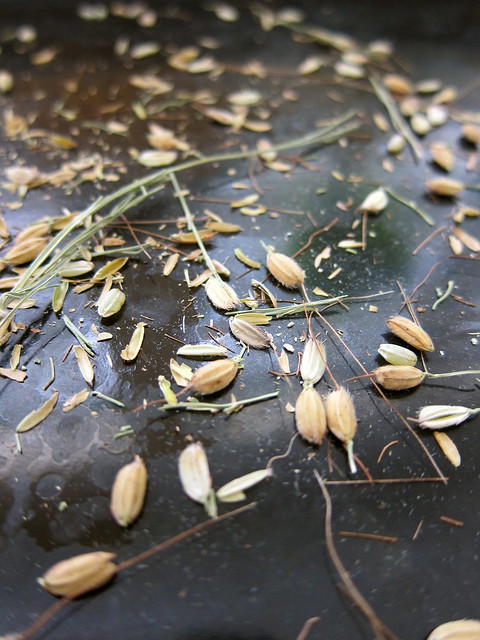 Next to growing it in the first place, the biggest obstacle to home growers is extricating the rice from its notably tough hull. Unless you have access to a mechanical huller, one of the traditional methods is to pound the grain with a mallett. We opted for a more domestic approach by baking the rice for 1 hour at 180°F, letting it cool, then rubbing the hulls off each individual grain. 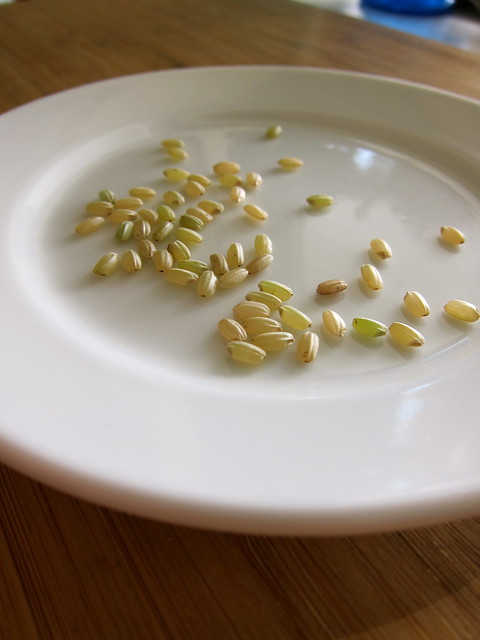 Hulling rice by hand is a painstaking process, for sure. One tiller produced about a half teaspoon’s worth of grain (above), and gives new meaning to the phrase “every grain of rice,” of which we’ll never think of quite the same again. It’s not enough to make a meal, however, it’s given us a more intimate understanding of what it may take to produce it locally. With last season’s success, we now leave growing it to our local farmers, such as our friends at Stout Oak Farm who have plans this coming season to grow out several varieties of rice, including Duborskian, as part of a regional effort to increase and expand the supply of available seed. 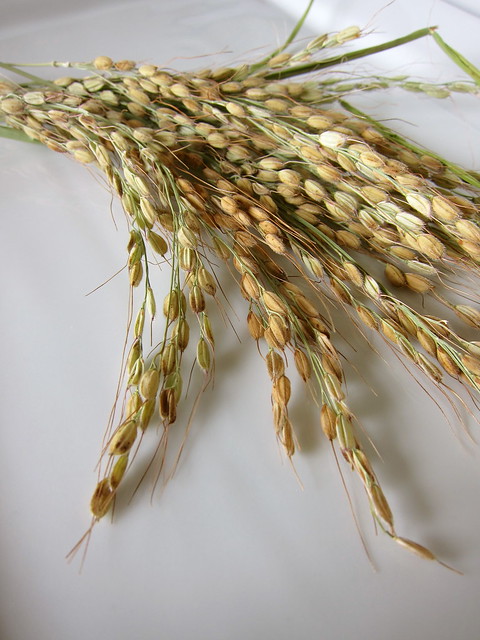 This entry was posted in garden and tagged grains, local, rice. Bookmark the permalink.