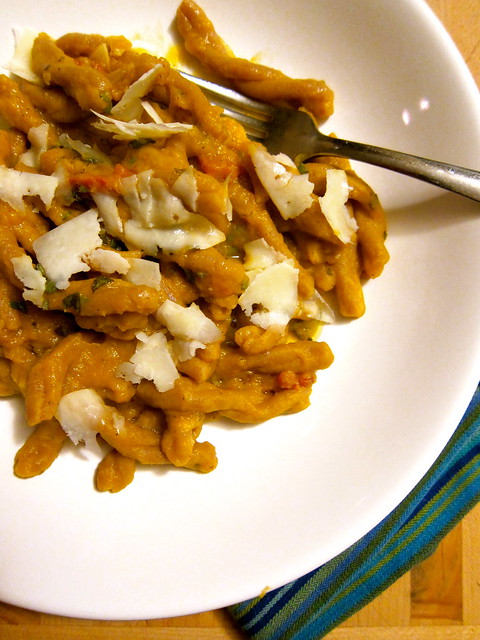 After it appeared in Bon Appetit last February, this recipe for Winter Squash Carbonara was quick to gain popularity, and deservedly so. It reminded us of when its sister publication Gourmet ran a column of tempting weeknight recipes that were known for their ease of preparation and with readily found ingredients, yet with some tantalizing combination or technique slipped in that also allowed the cook to expand their kitchen knowledge. We found this silky preparation of braised winter squash, with its balance of salty, smoky and sweet notes, all that and made even more appealing by its adaptability. For our localized version, we swapped bacon from Top of the Hill Farm for the pancetta, some fresh Farro Casarecci pasta from Valicenti Organico, and an aged cheese called Primo Sale from Wolf Meadow Farm for the Pecorino. Exchange a red onion in place of the pancetta and vegetable broth for the chicken, and this readily converts into a vegetarian dish, and because there aren’t any eggs, it may even be suitable for vegans. And for our nightshade-intolerant friends, this provides a satisfying alternative to tomato sauce. 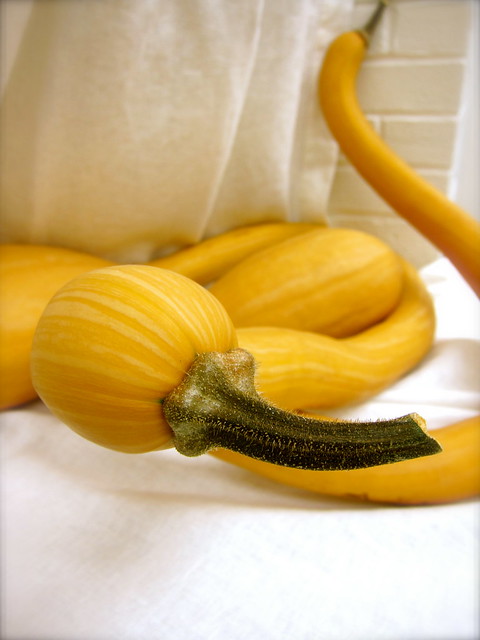 The most obvious advantage of Winter Squash Carbonara is that it gives us a new way to deploy the slumbering squash we have remaining in storage. These
Tromboncino squash (above) have a quality unusual among Cucurbita moschata in that they’re dual purpose, and can be eaten as both a summer and winter squash. Also known descriptively as Serpentine Squash or Zucchetta Rampicante, we grew this Italian heirloom for the first time last season, and found it responded well to our microclimate. More importantly, it’s also resistant to pests and disease, and to squash vine borer and powdery mildew in particular, two of our biggest challenges in growing winter squash successfully. 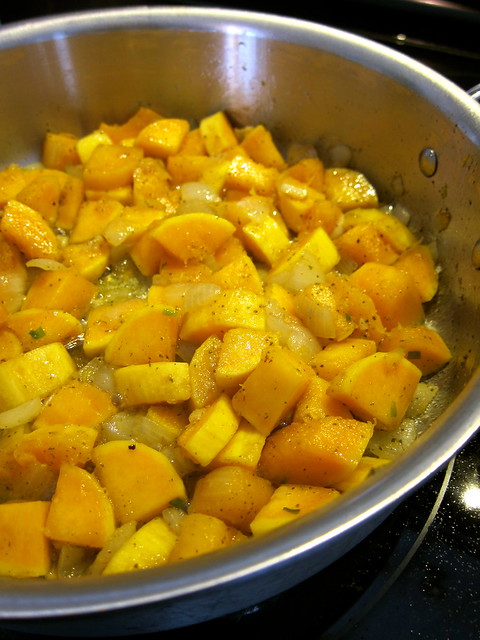 Tromboncino resides in the same family as butternut squash, and we’re pleased to see how well it’s lasted through the winter. Though we haven’t taken it through all its kitchen paces, its dense flesh lends itself to steaming, grilling, baking, and even pickling. In its mature state, the flavor is mild and said to be reminiscent of artichokes. Since preparing this dish, we’ve learned that it should be peeled even further, reaching down to where the flesh turns orange. With another yard of Tromboncino still leftover, we’re left with plenty of opportunity to make this again.

– Heat oil in a large skillet over medium-high heat. Add bacon, reduce heat to medium, and cook, stirring occasionally, until crisp, 8–10 minutes. Add sage and toss to coat. Using a slotted spoon, transfer bacon and sage to a small bowl; set aside. Add squash, onion, and garlic to skillet; season with salt and pepper and cook, stirring occasionally, until onion is translucent, 8–10 minutes. Add broth. Bring to a boil, reduce heat, and simmer until squash is soft and liquid is reduced by at least half, 15–20 minutes. Let cool slightly, then purée in a blender until smooth; season with salt and pepper. Reserve skillet.
– Cook pasta in a large pot of boiling salted water, stirring occasionally, until al dente. Drain, reserving 1 cup pasta cooking liquid. Combine pasta, squash purée, and ¼ cup pasta cooking liquid in reserved skillet and cook over medium heat, tossing and adding more pasta cooking liquid as needed, until sauce coats pasta, about 2 minutes. Mix in ¼ cup Pecorino; season with salt and pepper. Top pasta with reserved pancetta and sage, shaved Pecorino, and more pepper. Makes 4 servings.

8 Responses to Winter Squash Carbonara with Bacon and Sage