For the last several years, I’ve set aside Labor Day weekend for canning tomatoes. We don’t have enough space nor the conditions in which to grow tomatoes in quantity, and  rely on local farmers for additional supplies. It’s been an unpredictable season, and paste tomatoes have been late in ripening. When New Roots Farm brought 25 pounds of Roma tomatoes — a type of plum or paste tomato that’s ideal for canning — to the Exeter Farmers’ Market, I was ready to take the whole lot.

It was while watching a video on freezing tomatoes when I discovered that a strawberry huller can be used for coring tomatoes. I don’t have much storage space and try to keep my cooking equipment winnowed down to multi-purpose ones. However, coring tomatoes with a paring knife can be tedious, as well as dangerous. After dispatching the lot of tomatoes quickly and neatly, and without the risk of having a knife aimed at my hand, this handy tool more than earned a place in my kitchen.

The meatiness of these Blush and Juliet and tomatoes (above left and right), also from New Roots Farm, makes them suited for roasting and drying, which concentrates their sweetness, and for turning into a flavorful sauce. They’re smaller than than the usual paste tomatoes, but similar enough that I was curious how they would can up.

The size of these mini-plum tomatoes can make it seem a daunting chore to peel and process them, but it went surprisingly fast. After blanching, their skins slipped off easily and all in one piece, turning it into a fun and satisfying task. 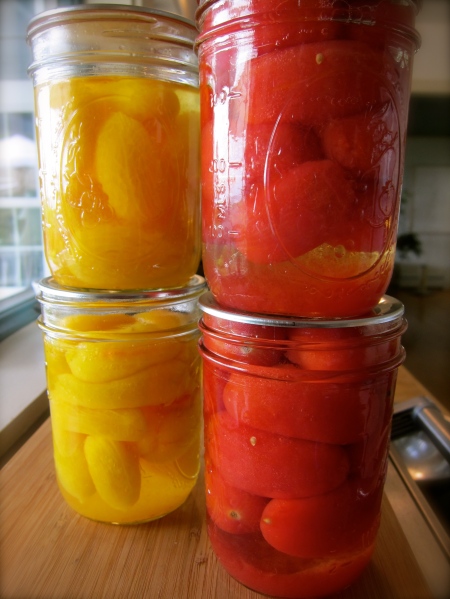 Raw-packing the Blush and Juliet tomatoes enabled me to can them separately from the Romas. I left them whole, and found their petite size just the right fit for packing into pint jars. I noticed some water loss in the jars of yellow Blush tomatoes, and brought it into my next Master Food Preserver class to find out what the problem was.

On loss of liquid in canning: If boiling-water processed, the loss is due to the cap not having been tightened enough before processing; if pressure canned, the loss is due to fluctuating temperatures during processing. In this case, the caps weren’t tightened enough before boiling-water processed. As long as the jars seal correctly, the tomatoes are fine to eat. Note to self: Make sure that the rings are on good and “fingertip” tight!

Since I already had all of my canning equipment out and a pile of cherry tomatoes from the garden, I finished up the weekend with a batch of Sweet Pickled Cherry Tomatoes, taken from The Preservation Kitchen by Paul Virant. As with most pickles, they need time for their flavor to develop before they’ll be ready for sampling.