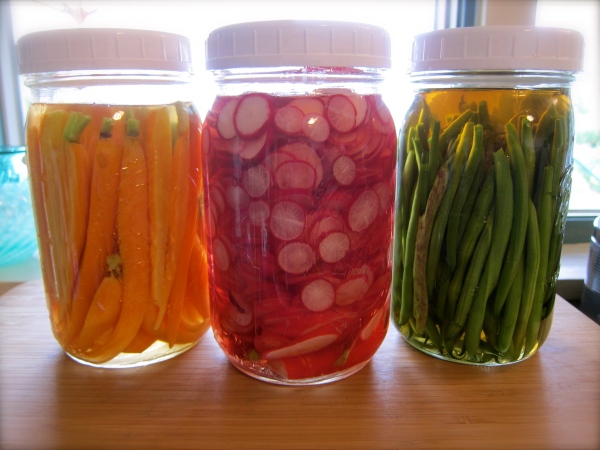 These jars are like a timeline of summer’s harvests. Ever since reading about Daphne’s refrigerator pickles, our refrigerator has been slowly filling up with them, added to as the season progresses. Left to right: baby carrots, Cincinnati Market radishes, and Masai filet beans mixed with Dragon Langerie, all in a rice vinegar brine. 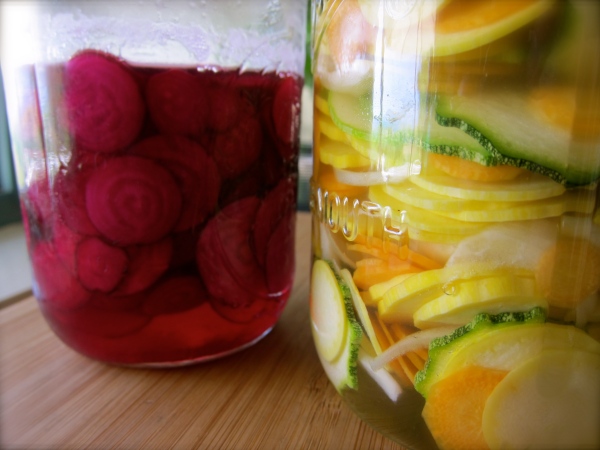 Above: A partial jar of baby beets, and a mix of summer squashes and carrots.

Our favorite slicing cucumber is Boothby’s Blonde, an heirloom from Maine. We usually plant more than we need to ensure there’s enough for the tomato and cucumber sandwiches we gorge on all season long. 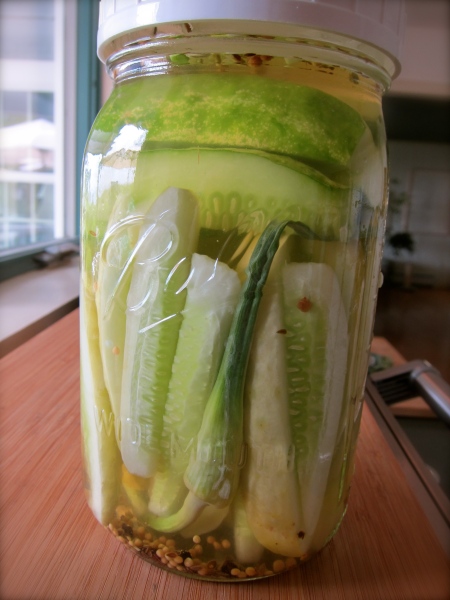 When canned, the Boothby’s tend to go soft, more so than conventional pickling cucumbers. Using them as refrigerator pickles seems to suit them perfectly — they retain their crisp texture, and taste of lemons in a beguiling way. I added pickling spices and a garlic scape to the jar above, with some standard green cucumbers filling in the top. 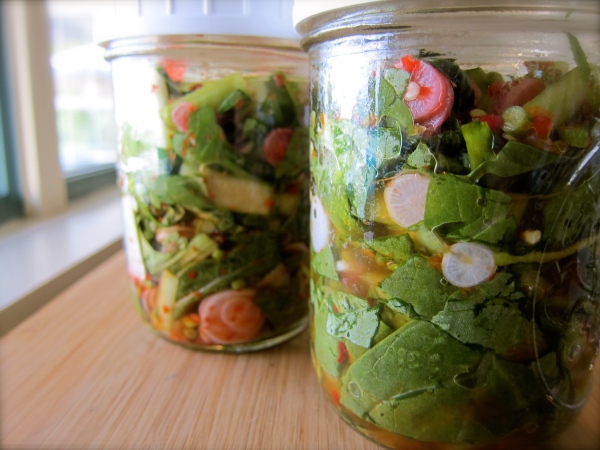 These jars were an experiment in making a quick tatsoi kimchi using two different recipes. Both were more like a salad, and made me miss the flavor and texture of a true kimchi. 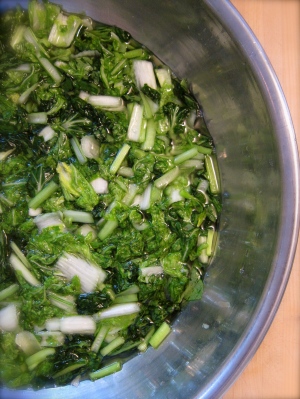 A mid-summer harvest of tatsoi and fun jen went into making our first batch of kimchi. Above: Before and after six house of brining. 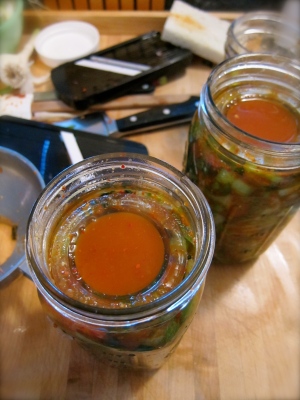 Once everything was mixed with the rest of the ingredients, the kimchi was packed into quart-sized jars. Glass jar lids from Weck conveniently fit inside a Ball wide-mouth quart jar; they’re placed on top in order to keep the vegetables submerged during fermentation.

I used Alex Lewin‘s recipe from Real Food Fermentation —  his book is super user-friendly, with many photographs of the process. He urges the reader to taste at certain points of the process, helpful advice for ending up with something you’re sure to like. For those unfamiliar with kimchi, Lewin also includes a list of serving ideas. 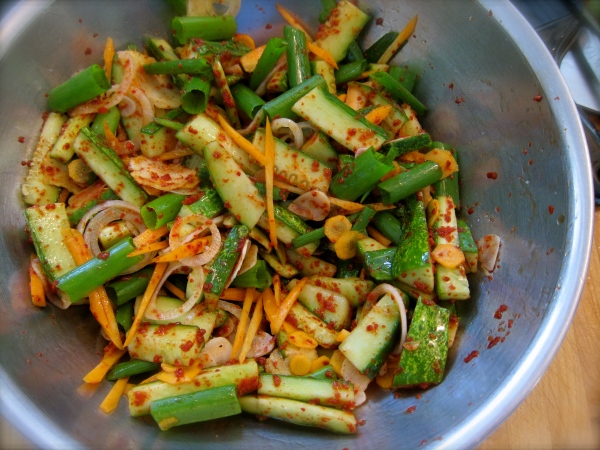 This version of cucumber kimchi is from David Chang’s cookbook, Momofuku. Meant as a fresh pickle, this particular combination of salty, sweet flavors reminded me of summers spent visiting my grandparents in Hawaii. 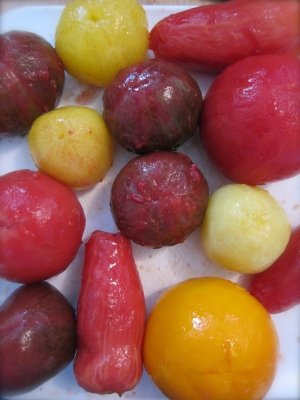 I make several jars of lacto-fermented salsa every year based on Sally Fallon’s Nourishing Traditions. This year’s batch is from a colorful mix of heirloom tomatoes fresh from the farmers’ market. 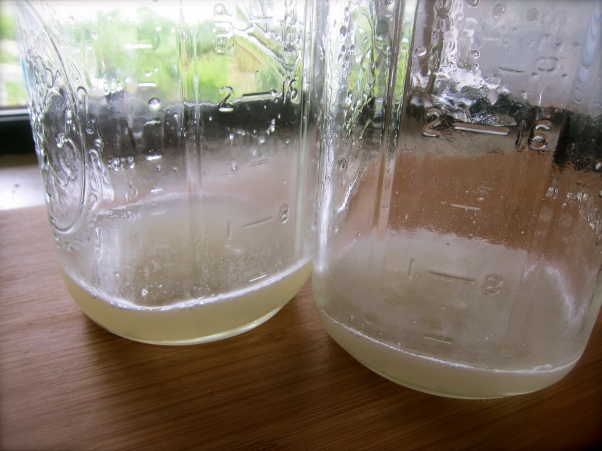 Each quart jar gets a dose  of whey obtained from draining yogurt, and salt. I employ a whey starter to create a favorable environment for the right microbes, and get the fermentation process off to a good start. 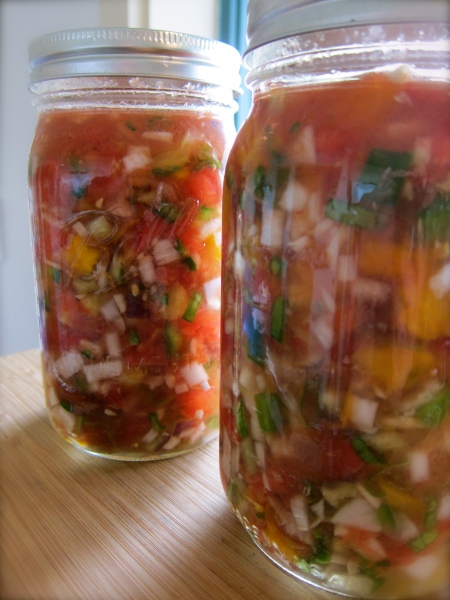 This method preserves the taste and texture of fresh tomatoes, and the resulting jars will more than make up for the space they take up come mid-winter. 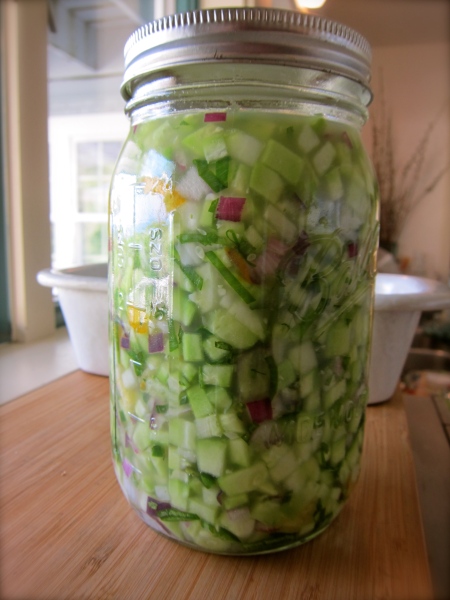 An excess of pickling cucumbers was an opportunity to experiment with a salsa based on them. With red onion and yellow tomato tossed in the mix, the color has since mellowed from its initial brightness. A taste-off is soon to come, and patience while everything cures, hopefully, rewarded.

A big welcome to those of you visiting from Bonbon Break, thanks for dropping by! Make sure to also visit Daphne’s Dandelions, where she hosts Harvest Monday, a weekly gathering of gardeners to show off what’s being harvested, and how it’s being used or saved. Harvests may ebb and flow with the change in seasons, however, there’s camaraderie in knowing others around the world are growing food in whatever space they have available, whether it’s on a balcony or windowsill, in a container or raised bed, or an entire lawn converted over to cultivation.

And a special hello to those of you coming over from Breaking New Ground, thanks for swinging by!