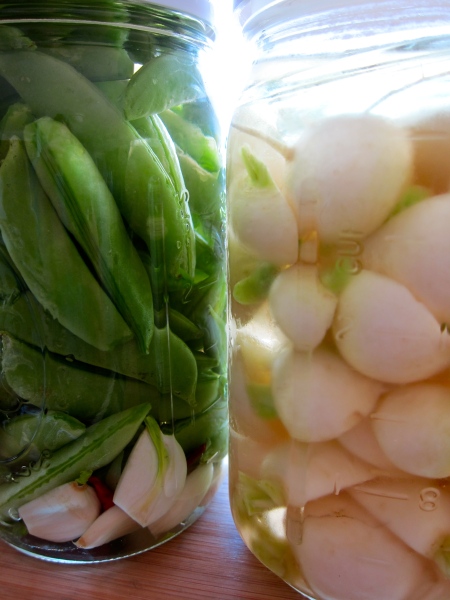 Preserving a bit of summer really doesn’t get any easier than this. I’ve been pickling for some years now, but usually the canned or lacto-fermented versions. I’d shied away from making refrigerator pickles with the fear that they wouldn’t store long enough to make it worth the effort. I was ready to reconsider though when I read about Daphne’s version, and an unexpected gift of a sack of sugar snap peas from a farmer friend came my way.

As I soon discovered, the clear flavors and still fresh crunch of pickling this way goes perfectly with summer meals. It’s also a terrific way to deal with garden produce, which comes in fits and starts, as well as CSA shares, which may come all at once. Just wash and cut up your vegetables or fruit, stuff them in a jar, and pour in some pickling juice mixed up from cupboard ingredients. Eat immediately, or let sit in the fridge for the flavors to develop. Store in the fridge for as long as they’ll hold — I’m expecting that those made in late summer into fall might last well into winter. 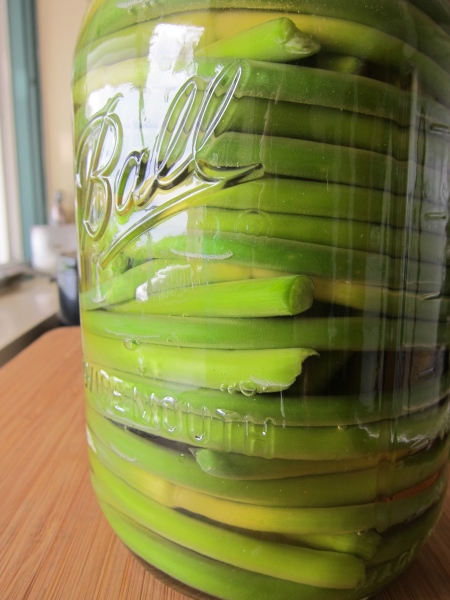 This master recipe is adapted from the Momofuku cookbook, and only differs in that I tend to use less sugar. It’s easily tinkered with to suit your taste, not just in terms of the proportions of the 4 basic ingredients — water, vinegar, sugar, and salt — but also in any number of combinations of vegetable or fruit, spices and herbs you may choose to use. I left the batch of Tokyo turnips plain, and added a couple of garlic cloves and chili peppers to the jar of sugar snap peas for added punch. I used cider vinegar with the garlic scapes — as tightly coiled as they may seem, I needed to double the amount of pickling juice to compensate for how loosely packed the inside of the jar turned out to be.

– Combine the water, vinegar, sugar, and salt in a mixing bowl and stir until the sugar dissolves.

– Pack the prepared vegetables into a quart container. Pour the brine over the vegetables, cover, and refrigerate. Pickles may be eaten immediately, but will taste better after they’ve had time to sit and cure — 3 to 4 days at a minimum, a week for best flavor. Most pickles will keep for at least a month, depending on the fruit or vegetable, some for several months.

Adapted from “Momofuku” by David Chang and Peter Meehan.

This entry was posted in cooking, preserving and tagged garlic, peas, pickling, turnips. Bookmark the permalink.