Few farmers bother to grow shelling peas any longer. The ones that still do, grow them for an older relative or for customers like me that don’t consider them too much work. Sugar snaps and snow peas have their own delightful qualities but, for me, they’ll never replace the singular deliciousness of English shell peas.

When it comes to peas, our garden’s too small to grow much more than what we eat in season. Lucky for me, Susan, of White Gate Farm, still grows these for her mother. For the brief period when they finally appear at the farmers’ market, I buy as much as I can carry. These look to be an heirloom variety, and are shorter than the hybrids, with just 5 to 6 peas in a pod. To keep them as fresh as possible, they’re quickly whisked home, no stops in between. I then dump the whole lot in something large enough to contain them, and cover with water to help them hold onto their inherent sweetness.

This is not a task for those in a hurry or in a frantic mood. I clear my schedule and settle down in the shade for a session of shelling, the bowl slowly filling with peas, as the basket does with their cast-off pods. Most of these will be frozen for later, with enough for dinner held aside. As I reach the last batch, I start a pot of water to boil.

To prepare peas for freezing: Blanch by slipping the lot, or by batches depending on amount, in a pot of boiling water. In very little time, they’ll float to the top, letting you know that they’re ready. Once they start bobbing to the surface, scoop them out immediately, and shock them in a bowl of icy water you have waiting nearby. This will stop them from cooking further and will help them keep their bright color, but don’t let them soak too long. Drain and let dry before freezing in shallow layers on a tray. Once they’re hard enough, package them up as you like for freezer storage. 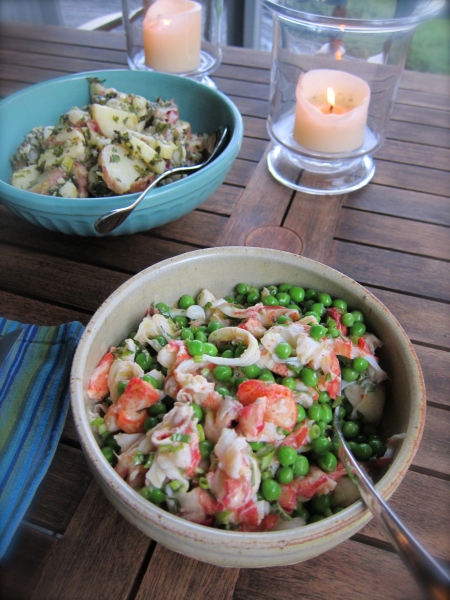 The ones put aside were tossed into a lobster salad made with a dressing of lemon, olive oil and basil, accompanied by a minty potato salad and another salad of greens — welcome to summer in Maine. Have a safe and happy Food Independence Day everyone!

This entry was posted in cooking, preserving and tagged freezing, peas, seafood. Bookmark the permalink.