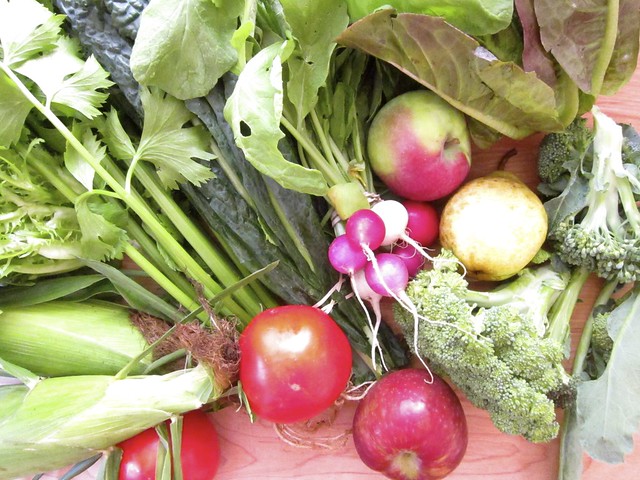 I rarely carry a list while shopping at the farmers’ market, and discovered that the basketful of food I brought home this weekend from the York Farmers’ Market satisfied cravings I didn’t know I had. I found a frilly head of frisee at Martha’s Garden, this particular one a French heirloom called Très Fine Maraichère Olesh endive, grown for it’s milder flavor and fine texture. As I tucked it into my basket, a tangly frisee salad laced with bits of savory lardons, an elegant version of bacon, came to mind. It’s a dish that always reminds me of bouts of frenzied cooking at the restaurant Quatorze, trying to keep up with the late night denizens of lower New York as the orders came rushing in once the clubs let out. The combination of cool, slightly bitter greens and salty pork, barely wilted by a warm dressing of mustardy vinaigrette, eases the transition, whether it be from late night hours to early morn, or, in this case, summer into fall.

Not all of the day’s encounters were so evocative, some were just reminders to fill some lack in diet. I picked up tonic broccoli, and thought of a skillet-full of Martha Rose Shulman’s Whole Grain Macaroni and Cheese laden with florets, while iron-rich lacinato kale introduces a favorite gratin back into my cooking. There’s also corn and tomatoes with slivered celery to be folded in for an end of summer salad, and red romaine tossed with crispy radishes for those meals in between. While some of my cravings are rooted in memory and others in a kind of bodily need, all feel met by this moment in the season.

This entry was posted in cooking, local food and tagged farmers' markets. Bookmark the permalink.