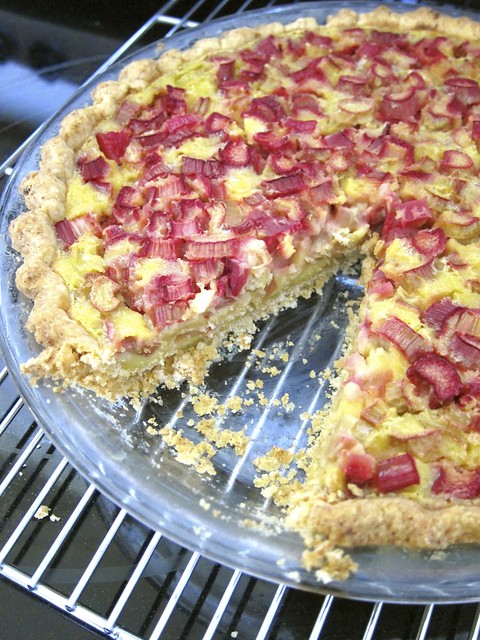 “Each Pie Maker is called to a particular type of pie. It is a deeper, more profound relationship than a favorite pie or one’s specialty. It is closer to destiny or fate.”
— Anne Dimock, “Humble Pie”

We heard the calling, and Rhubarb Buttermilk Pie was the answer. Though we may waver between apple and rhubarb, with rhubarb now coming into peak season, it’s rosy hue and tangy taste is what we crave this moment. We based our latest version on an Amish classic that falls in a category of pie that relies on a rich mix of cream and eggs to bind the fruit. In this case, tart chunks of softened rhubarb are enveloped in a smooth custard, melding with a toasty pre-baked pie crust. It’s like having pie and ice cream wrapped into one, especially when served cold. 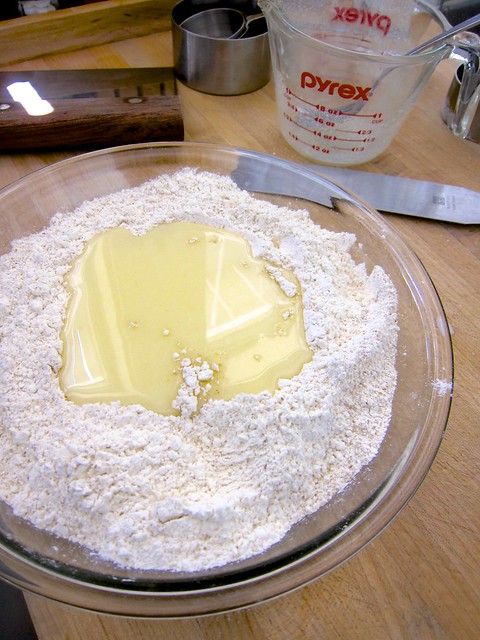 We paired this with an Amish No-Roll Pie Crust, one that’s mixed directly in the pie pan, then pressed out by hand, no rolling pin necessary. Cold vegetable oil and milk take the place of butter, and ease the process of mixing. Much like making pasta dough, the wet ingredients are worked into the dry until the soft dough comes together. 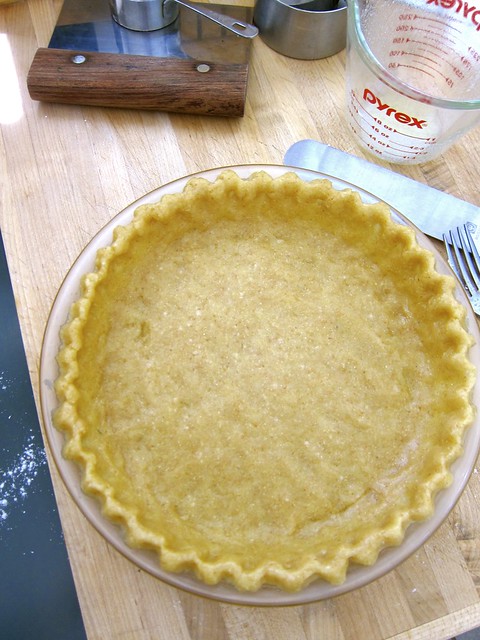 The pie dough is then smoothed out and pressed into place. Blind-baking the crust before filling sets it, and gives the crust a chance to caramelize and develop a hint of butteriness. Here, we used a freshly pressed local sunflower oil, which added it’s own rich, nutty notes. We replaced a portion of the flour with local whole wheat to give it character, and imagine a finely ground cornmeal would also do nicely. 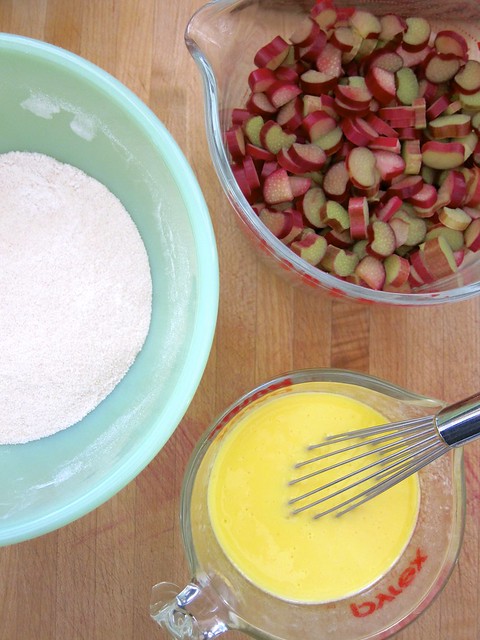 Though it’ll be tempting to add more, 3 cups of diced rhubarb fills the shell to capacity, especially once the rest of the filling is poured in. A smudge of piquant ginger, entirely optional, adds some warming spice in counterpoint to the tartness of the rhubarb. It’s suggested that this pie is best served cold, especially in the heat of summer, but don’t refrain from sampling it warm and deciding for yourself.

– In a small bowl, whisk together the flour, sugar and ground ginger. Whisk in the eggs, mixing thoroughly, before whisking in the buttermilk. Scatter the diced rhubarb evenly across the bottom of the pre-baked pie crust. Pour the buttermilk mixture over the top.
– Place the pie in a 375°F oven, and bake until filling is set, about 30 to 45 minutes. Remove from oven and let cool. Serve warm  or cold.

– In a 9-inch pie pan, mix together the flour, sugar and salt. In a measuring cup, beat the vegetable oil and 3 tablespoons milk together until it looks creamy. Pour the oil mixture into the flour, and stir with a fork until the flour is completely moistened. If dough feels dry, sprinkle and mix in extra milk, a teaspoon at a time. Pat the dough out until it covers the bottom and sides of the pan. Crimp or flute the edges. Refrigerate the pie crust for at least 20 minutes.
– To pre-bake, heat oven to 425°F and blind bake for 15 minutes. Remove from oven and let cool before filling.

Submitted to Novel Food, hosted by Simona at Briciole — Anne Dimock’s memoir, “Humble Pie: What Lies Beneath the Crust”, is generously sprinkled with wry observations, pie-making tips, and personal recipes that have become part of our own repertoire. A perfect summer read now that pie season is upon us.

This entry was posted in cooking and tagged baking, buttermilk, pies, rhubarb. Bookmark the permalink.