Tomatoes are often the first thing that comes to mind when people think of canning. They preserve well and, whether put up as sauce, crushed or left whole, are versatile to cook with in canned form. I’ve been canning tomatoes for more than several years now, but felt my technique could use some improvement and was looking forward to this next session in the Master Food Preserver Program.

The evening’s hands-on lab, our seventh in the training, included putting up batches of salsa, tomato-vegetable juice, and comparing pressure canned tomatoes against processing by boiling water bath processing. Page numbers above refer to one of our class texts, So Easy to Preserve.

Unlike fresh salsa, the canned version calls for peeling the tomatoes. Skip this step and the peels will separate from the tomatoes during processing, leaving the salsa full of tough, unpalatable curls of peel. We also took the precaution of wearing rubber gloves while cutting the hot peppers, and made sure to wash the cutting board thoroughly afterwards. Even so, my hands were tingling for the rest of the evening from contact with the capsicum residue left behind.

The recipe assigned, Tomato/Tomato Paste Salsa, requires two cans of tomato paste. Canned salsas tend to be watery, and the paste in this recipe helps to give it body as well as a rich, deep flavor. With other recipes, an alternative would be to drain off some of the liquid before serving. Another salsa recipe that was highly recommended is the one for Tomatillo Green Salsa; if tomatillos are in short supply, green tomatoes may be used in their place.

Canning salsa is a relatively recent phenomenon, and the National Center for Home Food Preservation has developed current recipes for combining this low and high acid mix, and for processing in a boiling-water bath. In regards to canning salsa, there is some leeway in altering approved recipes:

In general, keep in mind that the amount of low-acid ingredients should not be increased in proportion to the high acid ones.

The group making tomato juice added onions and garlic for a blend of vegetables. After the tomato mix was simmered for 20 minutes, the vegetables were pressed through a food mill to remove the skins and seeds. The juice was processed in a boiling-water bath, though processing in a pressure canner is also an option. In either case, lemon juice was added to each jar to ensure a safe level of acid. The green tool shown above (right) came with our class kits; the rounded end is for removing bubbles, while the notched end is for measuring headspace. 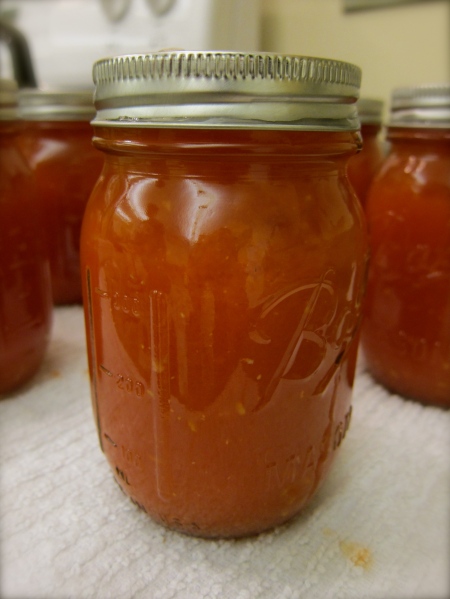 With a choice of vodkas made in either Maine and New Hampshire, I’m imagining this heirloom tomato juice as a base for a completely local Bloody Mary.

Boiling-water canner versus pressure canning, is there a difference? Directions for canning tomatoes often give processing times for both, and we were given the opportunity to test it side-by-side and decide for ourselves. Pint jars were raw-packed with peeled and cut tomatoes, and topped with hot water. Then half the jars were processed in a boiling-water canner for 40 minutes, while the other half were processed in a pressure canner for 15 minutes. 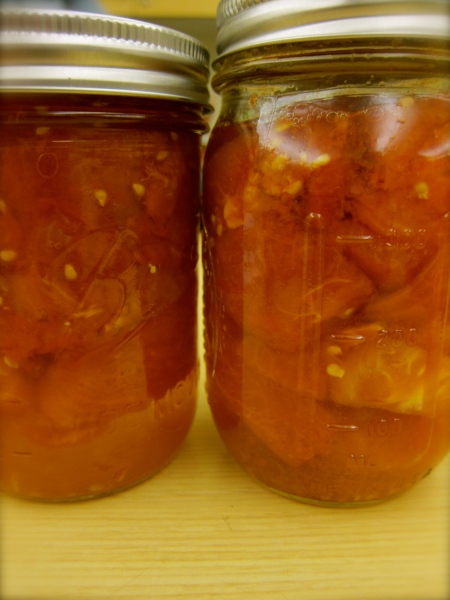 Though boiling-water canning required a longer amount of processing time (above, left), the pressure-canned tomatoes (above, right) needed additional time for the canner to exhaust, come up to pressure, and to decompress. This adds a considerable amount of time, especially when canning more than one batch. Of note, several of the pressure-canned jars failed to seal, and many of the jars lost liquid — a problem of fluctuating temperatures during processing and/or lids not having been tightened enough.

This series of posts follows the Master Food Preserver Program being offered through the University of Maine Cooperative Extension.