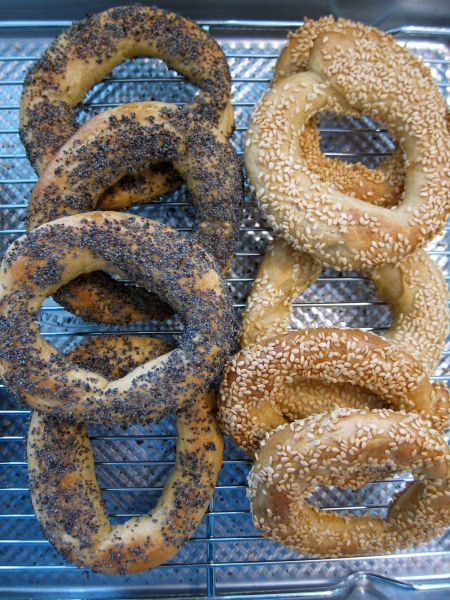 I’d stumbled upon a recipe for Montreal bagels while thumbing through HomeBaking, by Jeffrey Alford and Naomi Duguid, and was intrigued by what seemed an entirely different kind of bagel. Where New York-style bagels are puffy and moist, Montreal bagels are meant to be skinnier, denser and sweet. That I’ve never 1) been to Montreal, 2) tasted  a Montreal bagel, nor 3) tried any of Alford and Duguid’s recipes presented a challenge. 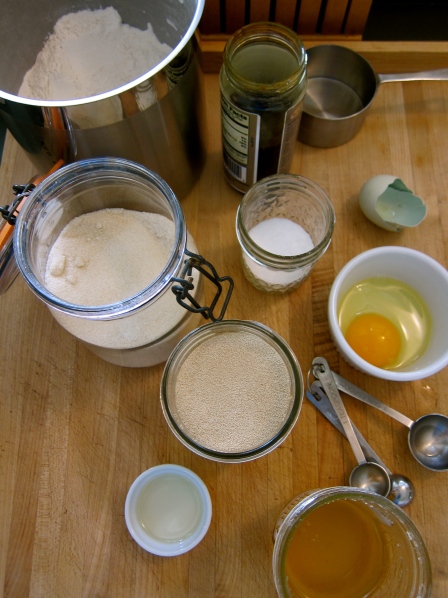 As a comparison, a search of Eat Your Books came up with only two references (a third one was for stuffing), and most other online sources pointed to a recipe either from the New York Times or Marcy Goldman. The ingredients lists are similar enough, with the biggest difference in given amounts of sugar. I was willing to sacrifice tradition for something less sweet and, after some consideration, chose to go with Alford and Duguid’s recipe after all. The expected yield of 32 bagels seemed like a lot but, in the end, turned out not to be. 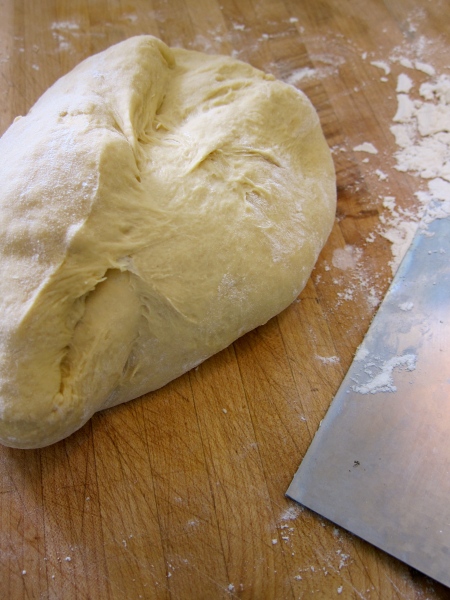 Judging hydration is always a challenge, especially when flour amounts are given by volume rather than weight. A friend advised me to trust Alford and Duguid, and after some kneading, the sticky, egg-enriched mass finally transformed itself into a smooth and elastic dough. 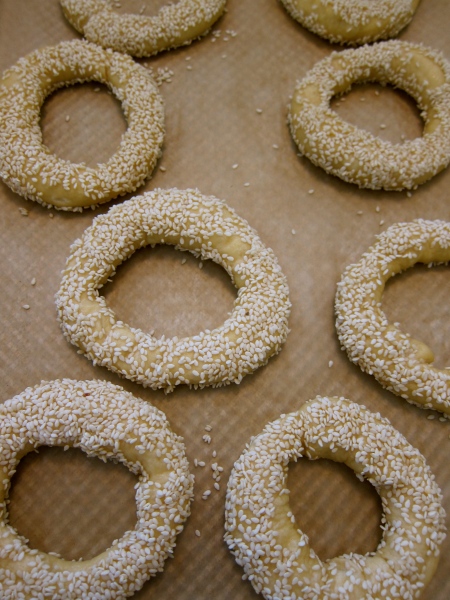 After portioning the dough, forming it was a little tricky, and I was glad to have had some previous experience to rely on. With some experimenting, I found letting the dough relax between steps allowed me to shape them into skinny rings with a more pronounced hole. The bagels are immersed briefly in a hot bath of honey-sweetened water, then dipped on both sides, some in sesame seeds, others in poppy seeds. 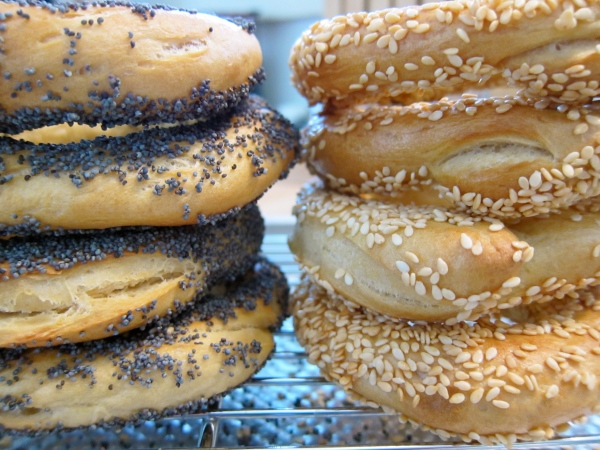 Baking in a wood-fired oven is reportedly what gives Montreal bagels their distinctive flavor and crunch. Making do with my standard oven, my first batch came out undercooked, with a chewy, pretzel-like texture. Nice, but hardly memorable. Increasing the cooking time, though, was a simple adjustment, and made all the difference. Soon I had a bagel with a delicate crunch, and a satisfying proportion of crust to crumb. I was tempted to make these bagels plain, but the seeds lend crispness, their slight bitter edge mingling with and offsetting the sweetness.

Fresh from the oven, I ate one, then two, then another, returning later in the day to snack on some more. The next morning they were heavenly, split and toasted, then topped simply with some freshly smoked salmon from Popper’s Artisanal Meats, the taste of fired wood completing the harmony of flavors. While these bagels may lack in authenticity, their addictive nature did give me a sense of what the fuss is all about.

Baking notes:
– “Montreal Bagel” recipe from HomeBaking by Jeffrey Alford and Naomi Duguid.
– Recipe yielded 26 bagels, portioned at 1.5 ounces each.
– Work in single batches of 8, enough to fill a half-sheet pan lined with parchment paper.
– Skim the boiling water bath when using local (unfiltered) honey.
– Bake at 8 minutes, then flip each bagel, and finish baking for another 6 minutes.
– Best eaten within three to four hours of baking; otherwise, needs to be toasted.

This entry was posted in cooking and tagged baking. Bookmark the permalink.