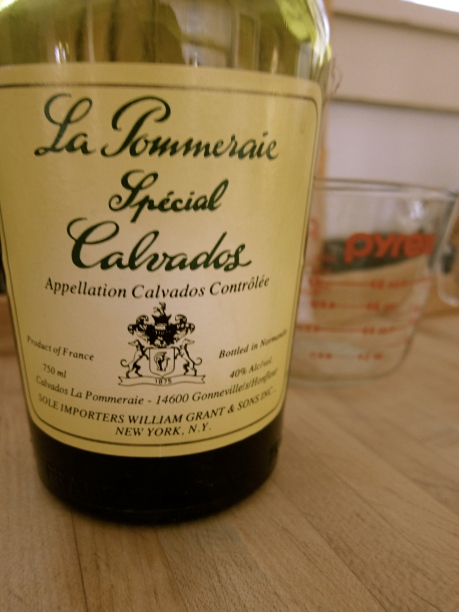 This wasn’t the first time I almost caught the kitchen cabinets on fire. When it comes to culinary technique, there are a couple of things I’m remarkably bad at, and burning off alcohol is one of them. It may be that I once caught my hair on fire in chemistry class, but I get spooked when it comes to putting match to flammable liquids. I’m grateful that the this recipe for pot-roasted chicken warned about “… keeping the lid of the pot nearby to extinguish the flames, if necessary.” As it turned out, it was indeed necessary.

Flaming alcohol aside, this is the kind of winter dish I love most. Once it’s put in the oven, time takes care of the rest. Use the finest chicken you can find — organic, pastured, local, maybe even a heritage breed, you know the drill — the dish is utterly dependent on its quality. The final result is a tender, juicy bird, anchored by bits of smoky bacon and the melting sweetness of celery root. Do take care when flaming the Calvados, though. Unlike burning off alcohol in an open saute pan, the fumes tend to collect within the Dutch oven and erupt in a mini conflagration. The next time I might avoid the issue altogether and substitute some local hard cider instead.

This recipe is adapted from Mindy Fox’s A Bird in the Oven and Then Some. Fox, along with chef Sara Jenkins, is co-author of Olives & Oranges, a cookbook that’s among my most frequently used. A Bird in the Oven promises “20 ways to roast the perfect chicken,” a likable subject. However, what drew me was the chance to continue cooking from someone whose taste I trust and admire. In addition to such variations as “Peruvian Roast Chicken” and “Tea-Brined Five-Spice Roast Chicken” are the 80 accompanying recipes. These make up the rest of the cookbook, and tempt one to roast up a chicken just to have enough leftovers to make such dishes as “Moroccan Carrot and Roast Chicken Tart” or “Roast Chicken with Poblano Chiles and Cream.” Many of these accompanying recipes, minus the chicken, can easily stand on their own in vegetarian form, making this almost a cookbook within a cookbook.

– Heat oven to 375°F. Rinse and pat chicken dry; tie or truss the legs together. Season the chicken generously with salt and pepper.

– Heat a 6-quart Dutch oven over medium heat, add the bacon, and cook until it releases its fat and begins to brown, 3 to 4 minutes. Add the celery root and cook, stirring, until starting to take on color, about 5 minutes more. Remove the bacon and celery root, and set aside, leaving the fat behind.

– Place the chicken breast side down into the pot and let brown, about 5 minutes. Turn the chicken breast side up, and let cook for about 1 minute. Add the Calvados and let it come to a boil. Carefully ignite with a long kitchen match, keeping the pot lid nearby to extinguish the flames, if necessary. When the flames die out, add the water to the pot. Return the bacon and celery root, along with the rosemary to the pot, remove from heat and cover. For a tighter seal, place a piece of parchment paper (larger than the opening of the pot) between the cover and pot.

– Place in oven and roast for 1 hour, undisturbed. Remove the pot, uncover, and let the bird rest in the pot for 15 minutes. Transfer to a cutting board, and let rest another 5 minutes. Meanwhile, if using, place the pot over heat and bring the pot juices to a simmer; swirl in the creme fraiche and mustard, and season to taste. Carve the chicken into serving pieces, and serve with the celery root, bacon and pan sauce. A side of chard or spinach sauteed with garlic provides a lovely foil and something to sop up the juices.

Recipe adapted from “A Bird in the Oven and Then Some” by Mindy Fox.

This entry was posted in cooking and tagged bacon, celeriac, poultry. Bookmark the permalink.

9 Responses to Pot-Roasted Chicken with Bacon, Celery Root and Calvados