“Sage: Occasionally used in French cookery but never in the large quantities in which it goes into stuffings for pork and duck in English cookery. Like rosemary, it can be a most treacherous herb, overpowering and spoiling the flavor of the food with which it is cooked.” — Elizabeth David, “French Provincial Cooking”

My first garden was a tiny corner outside the kitchen door. We’d just moved to Maine from New York and, for a beginning gardener, herbs seemed a reasonable place to start. Though the herbs I’d planted were common, being able to pick them fresh as needed was, and still is, a constant delight.

There are many cultivars of sage to choose from, however, common or garden sage (Salvia officinalis) is the one best known for culinary use. Sage comes up early in spring, with tender and mild-tasting leaves. As the season progresses, it gains strength and aroma, especially after flowering. Though most advise using it sparingly, this nutty sage pesto shows the herb off in all its “treacherous” glory. We used it to dress some gnocchi made from one of our winter squashes, and later spooned the remainder over a simple bowl of simmered yellow eye beans. 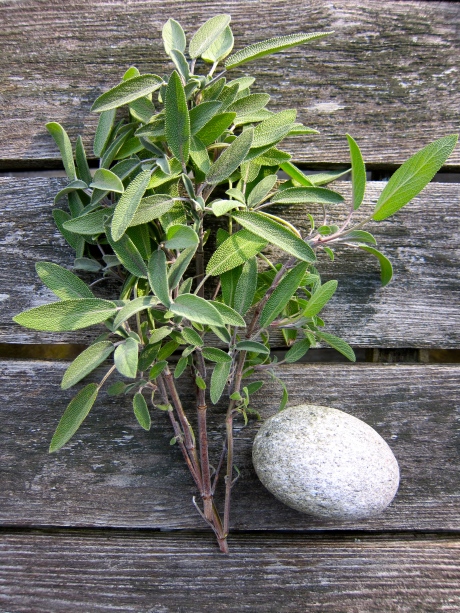 – Put the garlic and salt in a food processor, and pulse to chop. Add the parsley and sage, and process until blended. Add the toasted nuts and pulse until finely chopped. Slowly add the olive oil through the feed tube with the motor running. Stop the processor, add the cheese, and pulse until just combined.

– This pesto can be made in advance. Store in jar, covered with ¼ inch of olive oil; it will keep in the refrigerator for several weeks. It may also be frozen, and will remain good for up to one year.

Recipe adapted from “The Compleat Squash” by Amy Goldman.

This entry was posted in cooking and tagged herbs, sage. Bookmark the permalink.