We’ve enjoyed a run of sunny weather this week, and took advantage of it with a break from the many fall garden clean-up tasks by firing up our little practice clay oven. We had in mind to make pizza with egg, after the one we had at Da Baffetto in Rome. 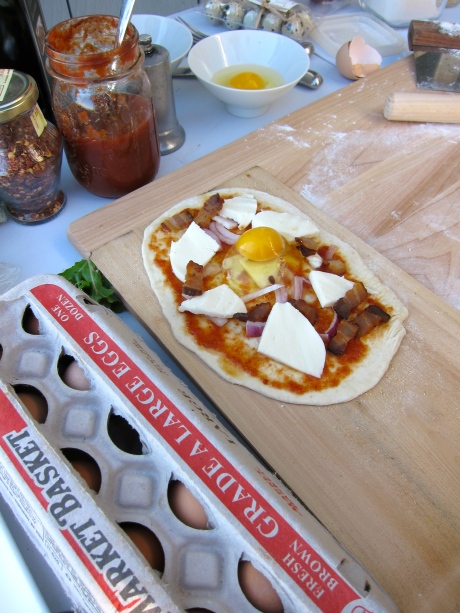 I’m tempted to call these breakfast pizzas. We start with homemade dough made partially with local whole wheat flour, then layered it with tomato sauce and slivers of red onion, bacon, and mozzarella. We used the toppings to form a “nest” that helped to contain the egg, and made a series of pizzas: one topped with a pullet egg, another with two quail eggs, and the last with a regular chicken egg. Don’t be alarmed by the egg carton — all of the eggs were from the local farmers’ market; the quail eggs from Mona Farm can be glimpsed at the upper edge of the photo, the pullet egg sitting on top of the pizza is from Hurd Farm. 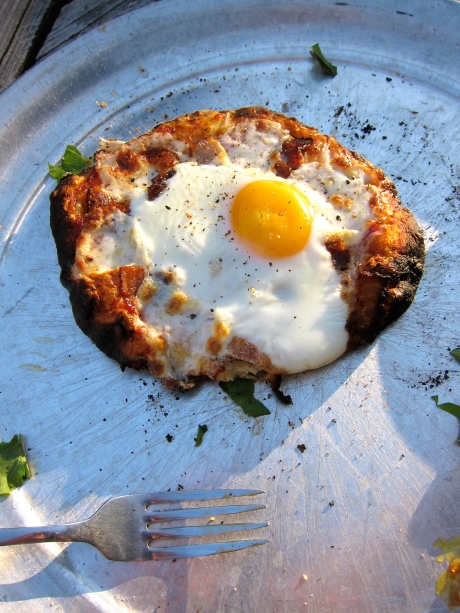 The pizzas were finished with some torn arugula clipped straight from the garden. It took us several attempts to get the temperature right — too high and the pizza burned before the egg could set; too cool and the crust would bake too slowly, becoming doughy. I was able to get a photo of this last pizza — the regular sized egg on this one was almost too big for it, and made it difficult to get off the peel into the oven. This one, like the others, was scarfed down immediately. We didn’t eat for an entire day afterwards, but it was well worth the effort to figure out how to make these.

This entry was posted in cooking and tagged cheese, eggs, pizza. Bookmark the permalink.

5 Responses to Wood-fired pizza with eggs