The overnight temperatures are hovering around 50°F and we’re concerned about leaving the pomodorini appesi, or hanging tomatoes, out for much longer.

The Aprile pomodorini are beginning to take on color, enough so that we were able to harvest a few of the lower, mostly ripe bunches.

There’s still lots of fruit left on the vine with a ways to go.

The Ponderosa sel Oro are also beginning to ripen, but lag significantly behind the  Aprile. We’re hoping to get more color on them before being forced to harvest.

Depending on how they do the rest of the season, we may simply not have enough growing time to continue with this variety. 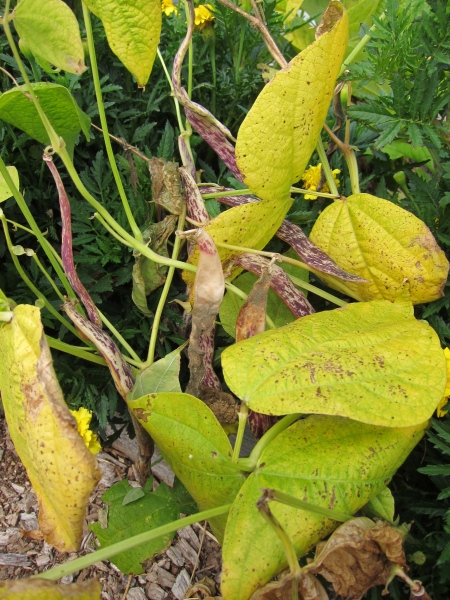 The cold is also affecting the other less tolerant plants like this second planting of Dragon Langerie beans, which are dying before the pods can mature.

A harvest of both planting of beans, semi-mature and dried.

Three different stages of shelled beans (clockwise, starting from left): immature beans, beans from fully dried pods, and true shelling beans from mature, partially dried pods. We’d thought the green immature beans would be similar to edamame, and boiled them as a test sample, but turned out tasting bland and starchy rather than sweet and creamy.

The Boothby Blonde cucumber plants had dropped most of their flowers during the heat of summer. They’ve now recovered and making up for lost time by producing steadily. Trimming the vines of damaged leaves seems to help slow down disease.